Streams, Downloads, CDs and Vinyl
Listen to a few of our songs, and get some previews of songs not yet released.
Song Audio Files

Don't miss this exciting science fiction rock opera!  Check out THE ANDROID'S NEW SOUL!
SYNOPSIS:
After a future war kills almost everyone, a woman reprograms an android to be her boyfriend. 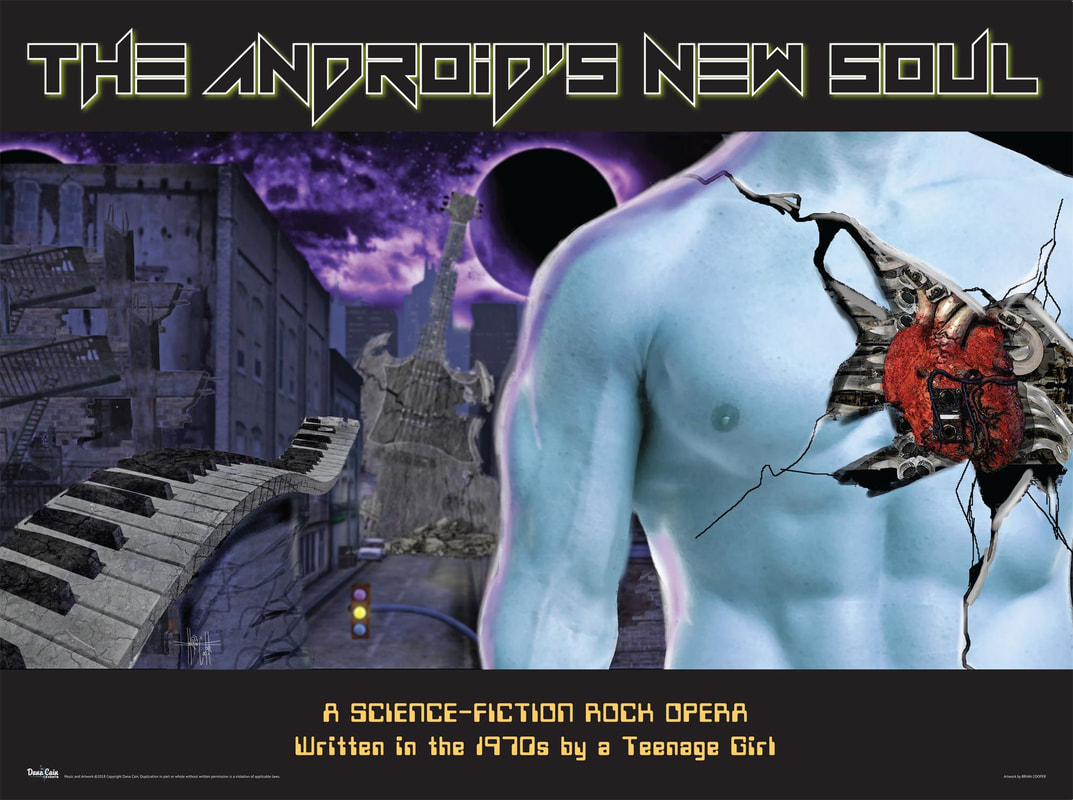 Praise from the Press:
"Imagine if instead of watching B-movies on MST3K, Joel Robinson wrote rock songs. Imagine if Roger Waters wrote sci-fi or if Nicholas Sparks got his hands on the Terminator script and a bottle of whiteout.

...The 22-song album spans the decade like a Time Life Presents tribute to all the great sounds of the 1970s. The combination of electro-synth-spoken word on “Nonstop City,” hard rock anthem “Android Factory,” and the self-explanatory “Funky Disco Android Sex Song” layer into a mix tape that is both nostalgic and new, equal parts kooky and cool."    - Denver Westword
BACKGROUND...

This story was conceived and begun in 1974 – 1975, when I was a senior in high school. At that time, inspired by works like Jesus Christ Superstar, Tommy, Phantom of the Paradise and Rocky Horror, it seemed like rock operas were the wave of the future. My life plan was to grow up, get a job with Creem magazine, marry Elton John and write rock operas with him.

David Bowie was my main musical influence, and I spent most of the early-mid 70s listening to his science-fiction themed albums. It’s safe to say this rock opera would not exist without the inspiration I drew from Bowie’s music and ideas. I loved science fiction, and music, and David Bowie combined them perfectly. I also listened to lots of Hawkwind, Parliament-Funkadelic, ELO and other sci-fi-inspired music.

On my 58th birthday, I decided to finish the rock opera. I dragged out the old “sacred texts” as I called them, perused the songs that I’d written and pondered the lyrics that had no music. It needed more. To my surprise, I realized that a flurry of songs I’d written in 1980 (when I was obsessed with androids and mutants) filled out the story line perfectly. I also realized that some instrumental piano songs I’d written over the years happened to fit perfectly with some of the lyrics!

I enlisted the collaboration of Mark Putt, a dear friend and genius songwriter I’d worked with before, and he wrote guitar-based melodies for many of the songs still needing music.  Then I set about hiring singers and musicians to bring The Android’s New Soul to life.

The story hasn’t changed since it came into my head in 1974.  I only wrote a few new songs to finish the project. I hope you like it! 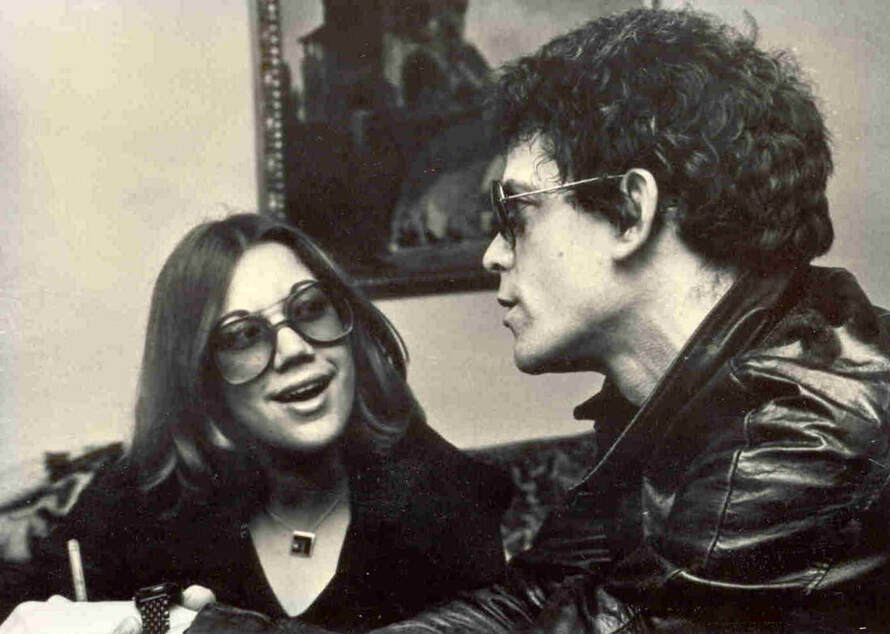 They say everyone has a novel in them. For the last 44 years, Dana Cain has been carrying around a robot romance rock opera that she began writing on a typewriter as a teenager.

Now thanks to her willpower, good friends, and unexpected technological advancements, that crazy old album is finally being heard.
Cain describes The Android’s New Soul as the typical girl-meets-android story: After nuclear war kills almost everyone on Earth, survivor Dr. Stacy Starr reprograms a killer clone to be her boyfriend and names him Christopher. Once their love has mushroomed into promise-ring status, Stacy starts feeling the effects of radiation poisoning.

In 1974 when she began writing the rock opera, Cain’s favorite album was Journey to the Center of the Earth by Yes keyboardist Rick Wakeman. She also loved Hawkwind, Elton John and above all else, David Bowie.

“Picture this: Pensacola, Florida, senior in high school. My family lived out in the suburbs” says Cain. “My room on the second floor – picture gold shag carpet. I had my double bed in the middle of my room, and it had a gold fur bed spread…The reason I didn’t have my bed against the wall is because my walls, floor to ceiling, corner to corner were posters of rock stars.” Every night when she went to bed, Cain put her pillow between her stereo speakers and stacked her favorite records on the turn table. It was rigged so the last album, Ziggy Stardust, would repeat and repeat until morning.

On summer vacation, she wrote lyrics and poetry late into the night. Then in the fall of 1974, she remarked in her diary, “Maybe I should write a rock opera.” At the time, Cain didn’t know that this strange story would follow her through her life, as she moved to Denver, started an award-winning event planning company and had kids of her own.

It’s hard to know what to expect in 2018 when someone sends you a link to a forty-year-old teenage sci-fi rock opera. But if you hit play with an open mind, you might find yourself asking, “Where has this been my whole life?”

Imagine if instead of watching B-movies on MST3K, Joel Robinson wrote rock songs. Imagine if Roger Waters wrote sci-fi or if Nicholas Sparks got his hands on the Terminator script and a bottle of whiteout.

Sure The Android’s New Soul is corny, but worse than that, it's catchy. The 22-song album spans the decade like a Time Life Presents tribute to all the great sounds of the 1970s.

The combination of electro-synth-spoken word on “Nonstop City,” hard rock anthem “Android Factory,” and the self-explanatory “Funky Disco Android Sex Song” layer into a mix tape that is both nostalgic and new, equal parts kooky and cool.

The lyrics are naïve, but honest, innocently aloof and confident – this girl had no doubt in her mind that if she wrote a rock opera it would be a worldwide success, and she didn’t care what anyone thought, least of all her future self.

“What I think is so funny is I picked it all back up when I was 58,” says Cain. “And I looked back at that one song, ‘Humanized Steel’ when she’s like, 'I’m going to make you the perfect man and give you all these feelings, and you’ll be just like me'  – it’s like when I wrote that in high school, it honestly seemed perfectly logical to me. It seemed like, ‘Well sure. That’s a brilliant idea.’”

Because, “This is not necessarily how you want to approach your relationship,” Cain added in a response track from the android who asks the teenage scientist reprogramming her, “Where did you go to school?”

Dozens of other science fiction stories from the era imagined a future with automatic doors and video chat, technological dreams that have long been realized and taken for granted. But it’s these types of developments, these days of future past that also made Cain’s dream possible: Amazon, Garage Band, Dropbox, and even Facebook.

To find singers, Cain posted on Facebook that she would pay $150 a song, a price so low she hoped professionals would take it seriously.
“What I found out … is that $150 a song is a lot for singers,” says Cain. “It’s sad, but anyway, people ended up cross-posting it onto all of the musical theater sites and stuff, so I got like tons of submissions of people sending me their videos and vocal tracks, and I listened to all of them, and they were so good!” 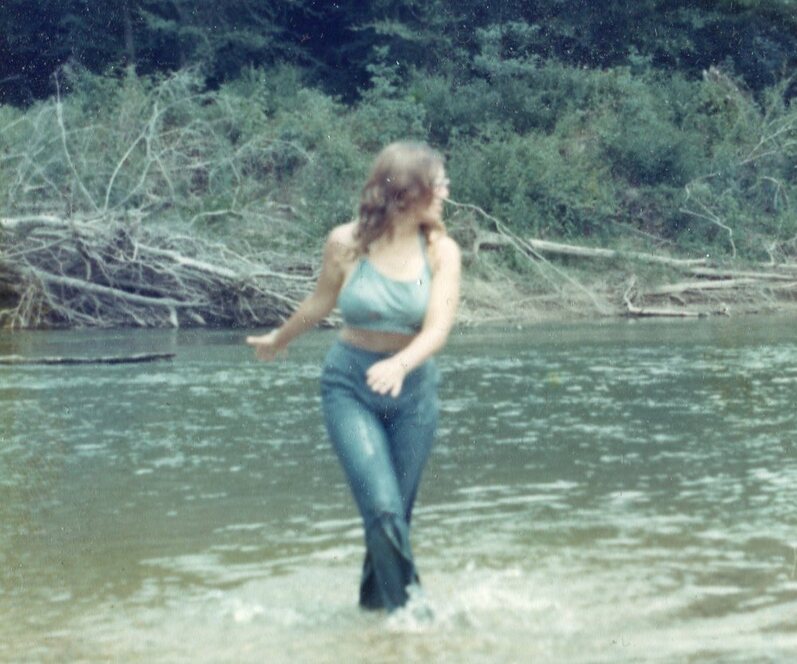 Dana Cain takes a break from writing in 1975 to dip into the creek in Pensacola, Florida.
Eventually she chose Suzanne Slade to voice Doctor Stacy Starr. In addition to performing in Rent on Broadway, Slade sings in the punk tribute band Daenerys and the Targaryens. Musical theater professional Ben Hilzer voices the android who comes to be called Christopher.
In addition to co-writing the music and playing guitar, Denver music scene fixture Mark Putt sings vocals on “Battle Clones” and “Nonstop City.” Steve Antonio plays the "Punk Mutant.” Mark Penner-Howell mixed and orchestrated the album, layering in vocals and sound effects as the android’s own Phil Spector.

From paying her artists, to manufacturing the double vinyl and CDs, Cain dumped $32,000 into this project over two years. So far she’s made back $135 on album sales. But this soul project has never been about the money.

Called the P.T. Barnum of Denver, Cain has made a name for herself as an event planner. But while these events are planned with a strict budget and audience in mind, Cain says her “science fiction rock opera was utterly totally completely self indulgent. My events, those I do for the community, those I do with a ‘what’s the community going to like’ [attitude]… And this one is all for me.”

Of course, Cain also hopes when people pick up the album from Dana Cain Events, CD Baby, or at the Mutiny Information Café on Broadway, that they will also dig out their old diaries and dust off forgotten dreams. Cain is also hosting a listening party for The Android's New Soul at the Denver Modernism Show on August 26.

“All that stuff that you did as a kid, now’s the time,” says Cain. “Especially for people my age, because like anybody who wrote or did art or created anything in the ‘70s or the ‘60s or even the ‘80s, there was nothing you could do with it. Now, anybody can publish a book…and suddenly it’s like available on the biggest international bookstore.” 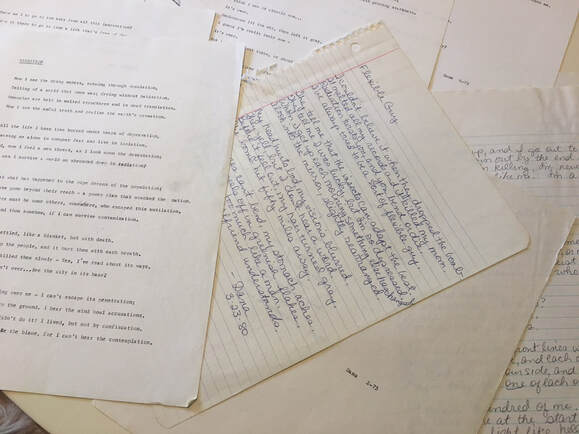 "Sacred pages" from Dana Cain's original manuscript for The Android's New Soul.
While some artists like to unwind after they’ve completed a bucket list project, Cain isn’t slowing down. She’s already at work on her next sci-fi musical, Love in Deep Space, a cross between Close Encounters of the Third Kind and The Love Boat. Additionally, Cain is shopping the script with local theater companies, determined to see it on stage by 2020.

“The weird thing is it’s never been performed,” she says. “That’s the next step.” 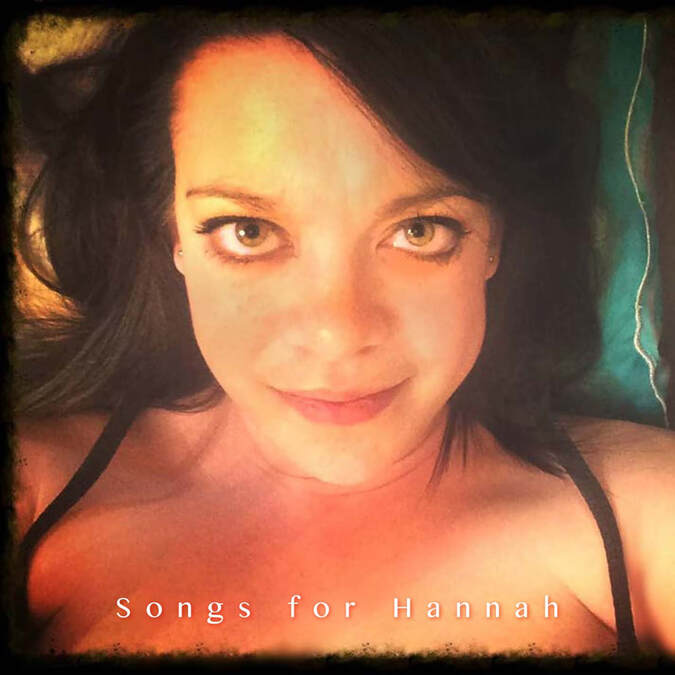 Songs for Hannah is the 2019 tribute album to Hannah Cain (1983 - 2018), produced by her mother, Dana Cain, with a dozen songs from various artists.
Get it on Bandcamp 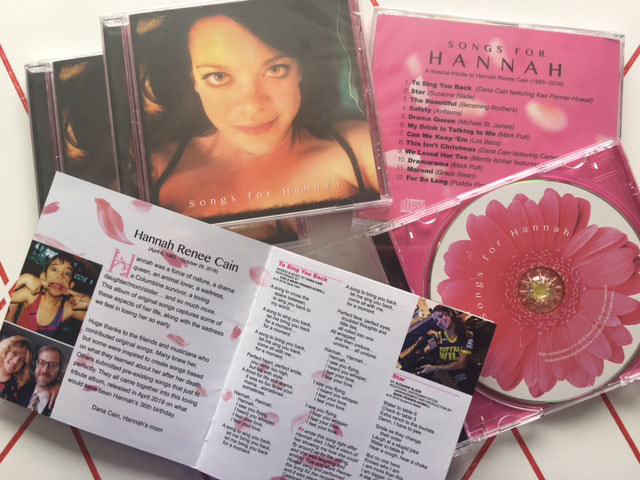 ​Hannah Renee Cain (April 6 1983 – October 28, 2018) was a force of nature, a drama queen, an animal lover, a waitress, a Columbine survivor, a loving daughter/mom/sister… and so much more. This album of original songs captures some of these aspects of her life, and more, along with the sadness we feel in losing her so early.

Huge thanks to the friends and musicians who contributed original songs. Many knew her, but some were inspired to create songs based on what they learned about her after her death. Others submitted pre-existing songs that just fit perfectly. They all came together into this loving tribute album, released on what would have been Hannah’s 36th birthday.

All proceeds go to the Education Fund for Hannah's daughter, Athena.

My Drink is Talking to Me
Words, music and performance by Mark Putt
Additional instrumentation (including harmonica), arrangement and production by Mark Penner-Howell.

Can We Keep ‘Em?
Words, music and performance by Les Baca
Additional instrumentation, arrangement and production by Mark Penner-Howell.

Maromi
Music by Grace Stean
Vocals by Buffy II and Hei Hei (Yes, those are chickens.)